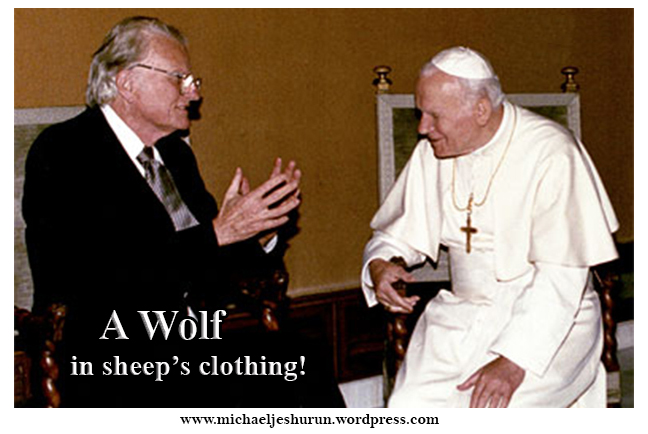 MODERN DAY PROTESTANTISM AND ROMAN CATHOLICISM . . . WHAT’S THE DIFFERENCE? . . . NOTHING!!!

In those days, Rome preached a salvation that had to be earned by man’s own works, as indeed it still preaches today; Rome taught that men were righteous before God, in part, by their own works, as indeed it still teaches today. In our day, the Protestant Churches teach and preach that salvation depends upon man’s own will; they proclaim that the sinner must achieve his own salvation by willing. This ‘gospel’ of much of Protestantism and the ‘gospel’ of Rome are one and the same. Essentially, there is no difference between them.

This is the reason why many Protestant Churches, preachers, evangelists and people find it possible to co-operate closely with the Roman Catholic Church, especially in the work of evangelism; and this is the reason why a great reunion with Rome on the part of many Protestants is in the offing. Rome says, ‘Salvation depends upon man working;’ modern Protestantism says, ‘Salvation depends upon man willing.’

Both are saying the same thing: ‘Salvation depends upon man.’ The apostle lumps both of these variations of the same basic doctrine together in Romans 9:16, and condemns them: ‘So then it is not of him that willeth, nor of him that runneth, but of God that sheweth mercy.