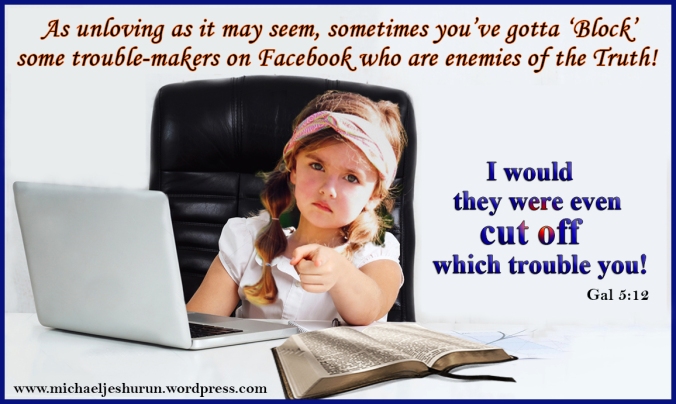 IF YOU POST COMMENTS OR GIVE LINKS ON OUR POSTS CONTRARY TO THE TRUTH WE ARE CONTENDING FOR . . . WE HAVE NO OPTION BUT TO BLOCK YOU!

This morning I was compelled to ‘Block’ Michael Branham from my friend’s list. The reason being that in spite of me warning folks not to come by and comment on my posts defending the Heresy I have exposed, this man did this very thing. I all long knew that he firmly held to the ‘Serpent Seed heresy’ and many other errors besides, but still I had him on my ‘friends’ list with hopes that our posts would open his eyes to his errors. But sadly some people are too far gone in this regard and the only option left at hand is to ‘Block’ them so they do not poison the minds of other babes who are being fed by our posts.

Please get this – unlike other nominal Christians such as the Roman Catholics or those who are a part of the Prosperity gospel etc, those who hold to strange ‘Cultic’ doctrines such as the Jehovah’s Witnesses, the Mormons, the Branhamites (i.e. those who follow the heresies of William M. Branham) and the like will never be content till they have washed your brains with their filth! There is no such thing as ‘agreeing to disagree’ with these heretics! They have befriended you or if you’re already an old buddy they are maintain that relationship with only one intention and purpose in mind – i.e. to talk you into their way of thinking!

You can even get along with a Roman Catholic or a nominal Protestant if only you just leave religion out of your conversation, but not so the Cultic! He cannot rest until he has bewitched you into his heresy! That’s just how it is! I have experienced this first hand on many occasions. The Apostle’s admonition is very appropriate here – “I would they were even cut off which trouble you!” In the language of our day that just means – ‘Block’ them from your ‘friends’ list and leave them to God!

There comes a time when we STOP trying to reprove, rebuke and exhort someone who claims to be a Christian with sound biblical teaching?”

The apostle said – “A man that is an heretick after the first and second admonition reject!” [Titus 3:10] While this is a direct reference to one who is a ‘heretic’, it pretty much applies to anyone to whom we are trying to convince of the truth.

Now there are some doctrines in Scripture that need a lot of study and labor to ascertain its veracity; but the doctrine of man’s Total Depravity, Bondage to sin and his Total inability to do anything Godward is very plainly set forth –

And the apostle reiterates this same truth when he affirms – “So then (salvation) is NOT of him that WILLETH, nor of him that RUNNETH, but OF GOD THAT SHOWETH MERCY!” [Rom 9:16]

Now against such PLAIN DECLARATIONS a man who claims to be a ‘Christian’ keeps insisting that – “a man has to make a conscious decision to accept Gods grace and that even if God has predestined someone to salvation they have to accept it with free will otherwise he can’t save them, etc.” . . . it is plain that it is ‘not given to him’ to see the truth! [Matt 13:11]

Please understand that initially many regenerated Christians who have sat under false teaching are made to believe that THEY had a part to play in their salvation – i.e. by ‘accepting’ Christ of their own free will etc. But by and by the Spirit is faithful to show them their error of it. And when such a regenerated soul hears the Doctrines of Grace they will love it and embrace it notwithstanding with many sincere questions!

WHY will a man who is born as God’s sworn enemy seek for Him?!! And what is there in Christ that is appealing to a soul dead in trespasses and sins?!! NOTHING!

Just as a ravenous lion does not desire the tender green grass of the field or the meek lamb desire carrion (the flesh of dead animals), even so a man that is born of a woman does not seek nor desire the Sovereign God of the universe! But remove or change the very nature of the ravenous beast and replace it with that of a lamb or an ox and then shall the ‘lion eat straw like the ox.’ [Isaiah 11:7]

Remember this beloved, that to the majority with whom we share the Word it comes to them in ‘WORD ONLY’! But to those who are the called – it comes not in ‘word only’ but “also in power, and in the Holy Ghost, and in much assurance!” [see 1Thess 1:5] The truth of the gospel is always either a stumbling block or foolishness to the vast majority! But “unto us which are saved it is the power of God.” [see 1Cor 1:18 & 24]

There are some rare exceptions where one who resisted and fought the Doctrines of Grace later was made to see the truth of it and receive it with gladness repenting of his former unbelief. But as a norm, if after one, two or three discussion sessions or debates a man still insists that he came to Christ of his own ‘free-will’ then it is most wise to heed Christ’s admonition and “let them alone!” [Matt 15:14]

Facebook (just like the the blogs we own) is like a ‘mini pulpit’ and is given to us by God to proclaim the truth which He has taught us! It is like an ‘open door’ for the Word. But as it was with Paul, so it is with us – “For a great door and effectual is opened unto me, and there are MANY ADVERSARIES”! [1Cor 16:9]

But just as we would not open our pulpits to those who preach error, even so we must take heed what comments we allow on any given article. In my opinion only two sorts of comments will bear fruit to any truth which we are proclaiming through our posts – One, comments which reinforce and reiterate the truth proclaimed and comments of those who are sincerely asking questions which may have risen in their hearts.

We may have written that Christ died only for the elect, but someone may sincerely ask – “But does not the scripture say, that He died for the sins of the whole world” etc. Such a question must be prayerfully answered, that not only the one asking the question but even others in whom that question may have risen may be taught and edified. As the Apostle said – “How is it then, brethren? when ye come together, every one of you hath a psalm, hath a doctrine, hath a tongue, hath a revelation, hath an interpretation. Let all things be done UNTO EDIFYING”. [1Cor 14:6] Note, that the Apostle is not against everyone contributing in the Church what God has taught them, but that it should be done ‘unto EDIFYING’ and decently and in order!

The comments on our facebook posts and blogs should not be a ‘free for all’ platform for every heretic and reprobate to spew forth his (or her) venom! Such heretics are not asking sincere questions but are already established in their heresy. The Apostle warned his flock saying – “If there come any unto you, and bring not this doctrine, RECEIVE HIM NOT into your house, neither bid him God speed: For he that biddeth him God speed is partaker of his evil deeds”! [2John 1:10]

My study of the Scriptures along with my experience has taught me that much of this ‘discussing the Scriptures’ is for the most part unprofitable and vain. The same Paul, concerning whom it is written – “And Paul, as his manner was, went in unto them, and three sabbath days reasoned with them out of the scriptures” [Acts 17:2], later wrote to Titus – “But avoid foolish questions, and genealogies, and contentions, and strivings about the law; for THEY ARE UNPROFITABLE AND VAIN. A man that is an heretick after the first and second admonition reject” etc [Titus 3:10]

I guess all those years of arguing and trying to reason with the carnal Jews had taught Paul a much need lesson, i.e. “you cannot pour new wine into old bottles” [Mark 2:22]. And one of the cardinal laws in any kind of Gospel preaching is to “avoid the devoid”! i.e. those devoid of the Spirit!

As every child of God knows, that it takes ‘grace from above’ to receive what we hold and preach. And if we think that we can talk someone into these truths by either our eloquence or debating skills, we can be sure that someone more eloquent than us can talk them out of it. Only GOD can convince anyone of the truth of divine Predestination!

Dearly beloved I am saying all this because if you are going to post articles on Facebook you should be aware that there will be men and women who are ‘devoid of faith’ who will attack you by commenting things contrary to what you have posted.

PLEASE DO NOT GET INTO DEBATES WITH SUCH PEOPLE!

You will only be wasting your time! Just delete such comments and if the person persists on posting such comments just click on their name and go to their Timeline (their main Facebook page) and right on the top where you see their “header image” you will notice three dots. Just click on the dots and you will find an option to ‘Block’ that person. Just block them! I have lost count of how many such trouble makers I have personally ‘blocked’ in order to continue preaching the Truth.

Trust me I would block my own mother if she came against God’s Truth!

“And there went great multitudes with him: and he turned, and said unto them, If any man come to Me, and hate not his father, and mother, and wife, and children, and brethren, and sisters, yea, and his own life also, he cannot be My disciple!” [Luke 14:25,26]

5 thoughts on “IF YOU POST COMMENTS OR GIVE LINKS ON OUR POSTS CONTRARY TO THE TRUTH WE ARE CONTENDING FOR . . . WE HAVE NO OPTION BUT TO BLOCK YOU!”