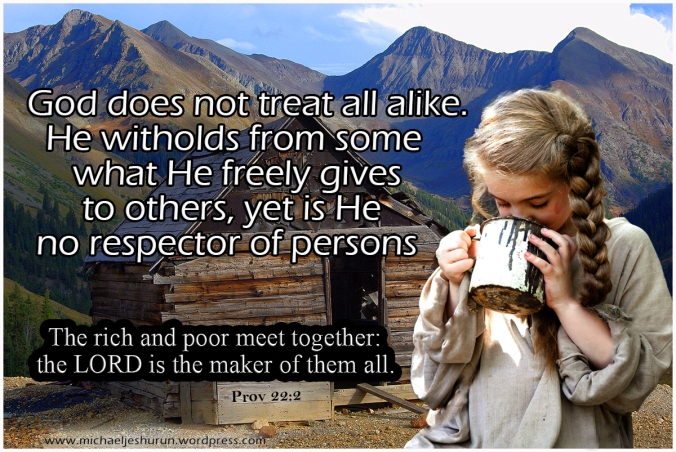 THE ‘DOCTRINE OF PREDESTINATION’ AND GOD AS A ‘RESPECTER OF PERSONS’

A “respecter of persons” is one who, acting as judge, does not treat those who come before him according to their character, but who withholds from some what is justly theirs and gives to others what is not justly theirs – one who is governed by prejudice and sinister motives, rather than by justice and law. The Scriptures deny that God is the respecter of persons in this sense; and if the doctrine of Predestination represented God as doing these things, we admit that it would charge Him with injustice.

In the Scriptures God is said to be no respecter of persons, for He does not choose one and reject another because of outward circumstances such as race, nationality, wealth, power, nobility, etc. When the Scriptures say that God is no respecter of persons THEY DO NOT MEAN that He treats ALL PEOPLE ALIKE, but that the reason for His saving one and rejecting another is not that one is a Jew and the other a Gentile, or that the one is rich and the other poor, etc.

GOD DOES NOT TREAT ALL PEOPLE ALIKE; HE GIVES TO SOME WHAT HE WITHHOLDS FROM OTHERS

It is a fact that in His providential government of the world God does not confer the same or equal favors upon all people. The inequality is too glaring to be denied. The Scriptures tell us, and the experiences of everyday life show us, that there is a greatest variety in the distribution of these,—and justly so, for all of these are of GRACE, and not of debt. The Calvinist here falls back upon the experienced reality of facts. It is true, and no argument can disprove it, that men in this world find themselves unequally favoured both in inward disposition and outward circumstances. One child is born to health, honor, wealth, of eminently good and wise parents who train him up from infancy in the nurture and admonition of the Lord, and who afford him every opportunity of being taught the truth as it is in the Scriptures. Another is born to disease, shame, poverty, of dissipated and depraved parents who reject and ridicule and despise Christianity, and who take care to prevent their child from coming under the influence of the Gospel. Some are born with susceptible hearts and consciences, which makes lives of innocence and purity natural for them; others are born with violent passions, or even with distinct tendencies to evil, which seemingly are inherited and unconquerable. Some are happy, others are miserable. Some are born in Christian and in civilized lands where they are carefully educated and watched over; others are born in complete heathen darkness.

As a general rule the child that is surrounded with the proper Christian influences becomes a devout Christian and lives a life of great service, while the other whose character is formed under the influence of corrupt teaching and example lives in wickedness and dies impenitent. The one is saved and the other is lost. And will anyone deny that the influences favorable to salvation which are brought to bear upon some individuals are far more favorable than those brought to bear upon others? Will it not be admitted by every candid individual that if the persons had changed places, they probably would have changed characters also? – That if the son of the godly parents had been the son of the infidels, and had lived under the same corrupting influences, he would, in all probability, have died in his sins?

In His mysterious providence God has placed persons under widely different influences, and the results are widely different. He of course foresaw these different results before the persons were born. These are facts, which no one can DENY and EXPLAIN AWAY. And if we are to believe that the world is governed by a personal and intelligent Being, we must also believe that these inequalities have not risen by CHANCE or ACCIDENT, but through purpose and design, and that the lot of every individual has been determined by the Sovereign good pleasure of God. “Even Arminians,” says N. L. Rice, “are obliged to acknowledge that God does make great differences in the treatment of the human family, not only in the distribution of the temporal blessings, but of spiritual gifts also,—a difference which compels them, if they would be consistent, to hold the doctrine of election . . . . If the sending of the Gospel to a people, with the divine influence accompanying it, does not amount to a PERSONAL ELECTION, most assuredly the withholding of it from the people amounts generally to reprobation”.

In Matt 11:25 we read of a prayer in which Jesus said, “I thank thee, O Father, Lord of heaven and earth, because Thou hast hid these things from the wise and prudent, and hast revealed them unto babes. Even so, Father: for so it seemed good in Thy sight.” In those words He thanked the Father for doing that very thing which Arminians exclaim against as unjust and censure as partial. When the Arminian admits that Christ died not for fallen angels or demons, but only for fallen men, he admits limited atonement and in principle makes the same kind of a distinction as does the Calvinist who says that Christ died for the elect only.

It cannot be said that God acts unjustly toward those who are not included in this plan of salvation. People who make this objection neglect to take into consideration the fact that God is dealing not merely with creatures but with SINFUL creatures who have forfeited every claim upon His mercy. Augustine well said: “Damnation is rendered to the wicked as a matter of debt, justice and desert, whereas grace given to those who are delivered is free and unmerited, so that the condemned sinner cannot allege that he is unworthy of his punishment, nor the saint vaunt or boast as if he were worthy of his reward. Thus in the whole course of this procedure, there is no respect of persons.

They who are condemned and they who are set at liberty constituted originally one and the same lump, equally infected with sin and liable to vengeance. Hence the justified may learn from the condemnation of the rest that that would have been their own punishment had not God’s grace stepped into their rescue.” And to the same effect Calvin says, “The Lord, therefore, may give grace to whom He will, because He is merciful, and yet not give it to all because He is a just Judge; may manifest His free grace by giving to some what they never deserve, while by not giving to all He declares the demerit of all.”

“Partiality,” in the sense that objectors commonly use the word, is IMPOSSIBLE in the SPHERE OF GRACE. It can EXIST only in the SPHERE OF JUSTICE, where the persons concerned have certain CLAIMS and RIGHTS. We may give to one beggar and not to another for we do not OWE anything to either. The parable of the talents was spoken by our Lord to illustrate the doctrine of Divine sovereignty in the bestowment of UNMERITED gifts; and the regeneration of the soul is one of the greatest of these gifts.

The central teaching in the parable of the labourers in the vineyard is that God is sovereign in the dispensation of His gifts. To the saved and the unsaved alike He can say, “Friend, I do thee NO WRONG . . . . Is it not lawful for Me to do what I WILL with mine own? Or is thine eye evil, because I am good?” Matt. 20:13-15. It was said to Moses, “I will have mercy on whom I will have mercy, and I will have compassion on whom I will have compassion”; and Paul adds, “So then it is not of him that willeth, nor of him that runneth, but OF GOD that sheweth mercy . . . .So then He hath mercy on WHOM HE WILL and whom He will He hardeneth,” Rom. 9:15-18. He will extend mercy to some, and inflict justice on others, and will be glorified by all.

Just as a man may give alms to some and not to others, so God may give His grace, which is heavenly alms, to whom He pleases. Grace, from its own nature, must be FREE and the very INEQUALITY OF ITS DISTRIBUTION demonstrates that it is TRULY GRATUITOUS. If any one could justly demand it, it would cease to be grace and would become of debt. If God is robbed of His sovereignty in this respect, salvation then becomes a matter of debt to every person.

Hence, then, to the objection that the doctrine of Predestination represents God as “partial,” we answer it certainly does. But we insist that it does not represent Him as UNJUSTLY partial.

[Paraphrased and quoted from – Lorraine Boettner – ‘The Reformed Doctrine of Predestination’]