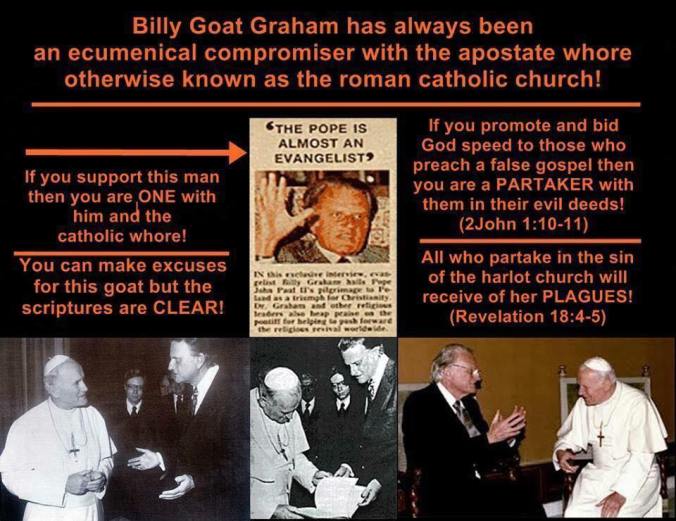 A LETTER TO THOSE WHO APOLOGIZE FOR BILLY GRAHAM

The following was a letter the Lord led us to write to members of a small closed forum who were trying to justify Billy Graham saying that “God used Billy Graham so why make a fuss?”
. . . . .
The tract by E.L. Bynum titled “Why We Cannot Support The Billy Graham Crusade” is not so much about whether God ‘used’ Billy Graham as it is about whether we in a good conscience can support or recommend such a ‘Ministry’

The Christian faith or the scriptures is not so much concerned as to how a man initially started his Christian walk as it is about how he fares NOW and how he finishes it! (1Cor 9:24) “The apostle had much to say about those who had ‘turned aside’ (1Tim 1:6; 5:15) and he does not speak favorably of them but on the contrary admonishes us to withdraw from such. (1Tim 6:5)

Did God ‘use’ Billy Graham? What of those who claim to have been initially blessed under his ministry? In other words if the man is basically a false teacher then how could God have used him to teach these Christians anything? But see, not ALL that Billy Graham and others like him teach is false. And when it suits His purpose Jehovah uses EVERYTHING starting from the Serpent who deceived our Parents to the worm which smote Jonah’s gourd! He uses men like Graham and the ‘Christian’ organizations they work for to make His name known among the nations and to prepare His elect for salvation. As the apostle said, “What then? Notwithstanding, every way, whether in pretense, or in truth, Christ is preached; and I therein do rejoice, yea, and will rejoice” [Phil. 1:18].

But after we are shown clearly that someone’s teaching on major issues is false or that the man is thoroughly ecumenical then Paul’s admonition to us is to cut off from such! (Gal 5:12)

Our belief in Predestination and the Perseverance of the saints ought not to silence us from exposing those who preach a false gospel or those who speak favorably of the ‘Great Whore’! (Rev 19:2) . If false doctrine and separation were not so serious a matter as we are making it to be, then why make a big fuss and place a curse on the man or angel who preaches a false gospel?! [Gal 1:8,9] All the apostles seemed to be pretty concerned that the ‘gospel’ be preserved and preached in its purity. They also had much to say about ‘false brethren’ and the need to ‘test’ every spirit whether it be of God and warn the flock of God of wolves who come unto them in sheep’s clothing!

The late J.C. Ryle said in his ‘Warnings To the Churches’ —”Surely the dumb dog and the sleeping shepherd are the best allies of the wolf, the thief and the robber.” And this is the very same thing Isaiah said long ago – “His watchmen are blind: they are all ignorant, THEY ARE ALL DUMB DOGS, THEY CANNOT BARK; sleeping, lying down, loving to slumber. they are GREEDY DOGS which can never have enough, and they are shepherds that cannot understand: they all look to their own way, every one for his gain, from his quarter.” [Isaiah 56:10,11]

“Dumb dogs” is the blunt term Isaiah used to describe those of his day who failed in their duty of guarding the flock of God—“Dumb dogs, they cannot bark!” (Isa. 56:9-11) God forbid that we who love the Lord and His truth be found guilty of such a charge! Like the apostle we ought to be able to confidently declare on the Day of reckoning – “I am pure from the blood of all men!” [Acts 20:26]

As J.C. Philpot pointed out long ago – “Though at times they may be made God’s instruments of good, perhaps, to His people, yet God shall have no more intention of final good towards them than to Ahab or Jezebel.”

Ahithophel was as if anyone had inquired at the oracle of God, so wise was he (II Sam. 16:23). He was David’s “counselor;” and they went sweetly together to the house of God. Balaam, also, had the Spirit’s gifted illumination. (Numbers 24:2). One of the greatest prophesies concerning Israel and the Messiah was prophesied by this false prophet, even Balaam– “there shall come a Star out of Jacob, and a Sceptre shall rise out of Israel, and shall smite the corners of Moab, and destroy all the children of Sheth etc” [Num24:17] And Judas though a ‘son of perdition’ accompanied the disciples and preached and healed just as they did, so much so when Christ said, “one of you shall betray Me” nobody even had the faintest clue that it was Judas. And Demas was a coworker with Paul [Col 4:14] long before he went out ‘having loved this present world’ [1Tim 4;10].

To quote Philpot again, “Thus Balaam and Ahithopel were God’s HIRED SERVANTS in gifts of wisdom, etc. “Thus saith the Lord God, If the prince give a gift unto any of his sons the inheritance thereof shall be his sons; it shall be their possession by inheritance. But if he give a gift to one of his servants, it shall be his (the servant’s) ONLY TO A CERTAIN TIME, NOT FOREVER.” (Ezek. 46:16 &c.) This latter was the character of such as Balaam, and is the character of many in our day. “As for their knowledge, though it may come from God,” (Num. 22) which is a tough test to try many by, “it shall vanish away”!

“And the servant abideth not in the house for ever: but the Son abideth ever”. [John 8:35]

We are convinced that men like Billy Graham and others like him who do not preach the whole truth, and unashamedly jump into bed with the ‘Great Whore’ are in reality those whom Christ called ‘hirelings’. For if they were truly sons, they would say with Paul – “For we can do nothing AGAINST the truth, but FOR the truth”! [2Cor 13:8]

Incidentally a ‘Christian’ is not just someone who embraces that which Christ loves, but one who HATES EVERYTHING which He abhors!

“Through Thy precepts I get understanding: therefore I HATE EVERY FALSE WAY”! [Psalm 119:104]

The Apostle’s admonition to those who call themselves ‘Christians’ is to – “Have no fellowship with the unfruitful works of darkness, but rather REPROVE them”. [Eph 5:11] The word ‘reprove’ according to Strong’s means to ‘tell a fault’ confute and rebuke – in other words to PROTEST!

We have a moral imperative to examine what is proclaimed in Jesus’ Name, and to expose and condemn false teaching and ecumenical compromise. Even the apostle Paul felt it necessary at times to rebuke peopleby name in epistles meant to be read publicly [Phil. 4:2-3; I Tim. 1:20; II Tim. 2:17]. John, the apostle of love, wrote a scorching condemnation of Diotrephes, a church leader who was ignoring the apostles’ teaching [3 John 9:10]. The biblical challenge is not to avoid truth that is controversial, but to speak the truth in love [Eph. 4:15].

Was Jesus (the one I claim to follow) a ‘Protestant’? Maybe I need to go back and read about the time when my Lord made a scourge of small cords and drove out of the temple those who were making a merchandise of His Father’s house! This is one of the few instances which is recorded in ALL the four gospels. Must be PRETTY IMPORTANT! And the Apostle tells us WHY he did it – “It was written, The zeal of Thine house hath EATEN ME UP”! [John 2:17]

Trust me, if you have even a little bit of Christ’s Spirit, then this SAME ZEAL ‘will eat you up’!

How can you claim to be a Christian, if you are not PROTESTING against that which parades in your Lord’s garb, while making MERCHANDISE OF THE SOULS OF MEN?! [Rev 18:13]

Something’s SERIOUSLY WRONG with the ‘Christian’ who can shake hands with a Roman Catholic and call him a ‘brother’ when countless souls under the altar are crying out to God to avenge their blood on the Great Whore! (Rev 6:9,10)

If you haven’t already done so, you need to get yourself a book called ‘The Book of Martyrs’ by John Foxe and read it and weep! And don’t just weep, take up the Sword of the Spirit which is the Word of God and cut this Roman Catholic system and the devil which rules it to the heart!

I am not advocating that you hate the Roman Catholic, dearly beloved, but you have got to HATE THE SYSTEM! For it is the spirit of ANTICHRIST! You must be willing to fight it ‘tooth and nail’ to your last dying breath! All of Christ’s true brethren fought this evil system and some of them sealed their testimony with their blood! So it is no light matter for a supposed brother like Billy Graham to receive an honorary doctorate degree from a Roman Catholic College Belmont Abbey, and stand on the podium declaring, “The gospel that founded this college is the same gospel I preach today.”

The Truth of God should never be sacrificed on the altar of unity. God is more concerned about preserving the truth of His Word in the church than so-called ‘peace’, ‘love’ and unity. As Owen rightly said, “For what peace in the Church without truth? All conformity to anything else is but the agreement of Herod and Pilate to destroy Christ and His Kingdom”. And again, “An agreement without truth is no peace, but a covenant with death, a league with hell, a conspiracy against the Kingdom of Christ and a stout rebellion against the God of Heaven”.